So as I spent some time working on the color image, I began to notice lots of little painting problems. One of them was that I was having some issues with painting values. So I went back, I took some time to look through some value paintings that were similar to what I was trying to achieve. I spent some time painting them, and kind of studying and learning from them. I set specific goals to try to learn from each one, and then I did a few iterations until I felt like I had learned what I needed from the given painting. Below are a few that I worked on, along with some of the goals that I had set for myself. After each iteration, I would analyze where I felt like I had made a mistake, and what I needed to do to do better the next time around. 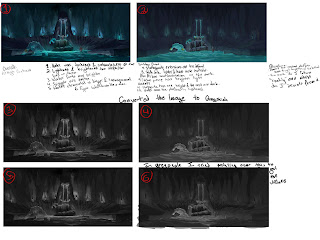