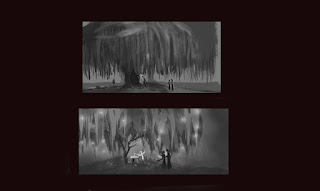 Hey guys, here's my latest update. My friend suggested that I go with the thumbnail at the top of the image. I then adjusted it to make it more like a willow tree, added the elements that I thought will make it look better, I added what I thought were the interesting design elements. (For example, I was influenced by Shinto shrines, and keeping things as something sacred. ) So here it is for now, and I'm going to blow it up and make it big. That's the next step.
Posted by Param at 2:30 PM No comments: 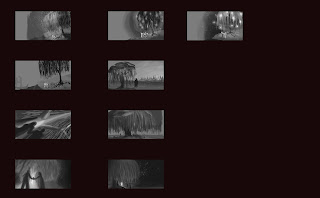 Here are some of the thumbnails for this. I'm leaning towards the one on the far right.
Posted by Param at 10:53 AM No comments: 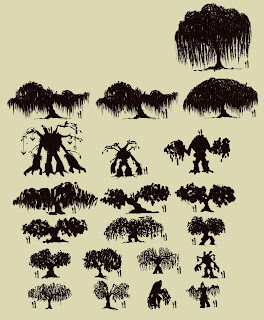 So I've started on a new project. Something much simpler. I thought it would be nice to do a small prop piece. The idea that I had for this one was to do something small that focused on a marriage between two people who's factions art at war.

This actually made me think of two things. The first is the disharmony that this can cause amongst others. For example, there's that movie "Look Who's Coming for Dinner." For those who haven't seen it, it's about a white woman and her dad being introduced and having dinner with her black boyfriend in the '60's. How do you deal with being an outsider? This is the kind of thing where, both people risk being excluded from both groups and being labelled as a pariah.

But there, is another side to this as well. This is a chance to create something new, different, better. In many ways, this will require both of them to be trailblazers and create a new path; their own path. The hardships, difficulties and strains will be very intense, but if they can use this "suffering" as growth, they can build something strong than what was done before.

For now, I wanted to capture this small moment because increasingly, it seems as though to create something that is more fulfilling or honest or truthful or maybe even suits us better, we must break away from past associations and allegiances.

So basically, this tree is going to symbolize that. It belongs to one faction, however there will be emblems of both sides on the tree. This couple must take the best parts of themselves to go beyond the drawbacks of their respective factions and allegiances. The tree is neutral though. It is part of nature. It is not a part of any faction, or allegiance, we put that meaning on the tree. The tree is that deeper part of ourselves, and we often decorate or turn it into what we want, or try to make it mean what we want. But ultimately, that tree was there before the couple met, and (unless there's a major war or disaster) the tree will be there after the couple have met. So by meeting at the tree, you want to sort of try to tap into something that goes beyond allegiances, politics, or petty rivalries. Perhaps we are looking for that part of ourselves that goes beyond these things.